ALBERTO – IT'S ALL ABOUT PANTS

Pants We Love – the slogan sounds like a promise. Yet it is so much more. In fact, it is a commitment. After all, for 100 years, ALBERTO’s creative studios have been experimenting with designs and materials to come up with stunning cuts, styles and functions. So what is the benefit of this wealth of experience? A perfect symbiosis of creativity and perfectionism. A young, fashionable twist comprised of bold experiments and supreme fashion know-how.


An idea transferred to fabrics

It takes about 40 steps to make every pair of ALBERTO pants. Each pair of trousers consists of no fewer than 36 individual components, which are assembled with great precision. Moreover, every pair gives the person who wears it that unique feeling of being custom tailored “just for me.” It’s always been like that and we will keep this tradition alive. At ALBERTO, we embrace perfectionism as a given because it is in our genes. The legend is alive – now being maintained by the forth generation of the founding family, with the fifth already gearing up for the role it will play. In 1922, Dr. Albert Dormanns laid the foundation stone for this success story as he was standing in the vacant building that had previously housed his since deceased grandfather’s fabric plant. Albert established his own company called the “Dormanns’ Trouser Factory” on the premises. He used an inventory of returns, sample coupons and overstock materials he had acquired to make jackets, pants and work garments. After the upheaval of the war, which had led to a brief relocation of the production lines to a restaurant, the owner decided to specialize in the production of men’s pants in 1950. He built a new factory for this endeavour. The new collection consisted of everything from breeches to sportswear pants to cropped pants – in short, everything men’s fashion demanded back in the day. After Dr. Albert Dormanns’ passing in 1968, his daughter Marie-Lore Walendy, nee Dormanns, inherited the business and entrusted her husband Rolf with its management. In conjunction with the management change, the former fabric plant was given a new name: Albert Dormanns Nachf. GmbH & Co. Rolf Walendy relocated operations to the former Clemens August Becker suit factory at the Rheydter Straße 19-31 address, where the company is still domiciled today.


From local hero to global player

Georg Walendy, Rolf and Marie-Lore’s son, who was just 24 at the time, joined his parents’ company as an office administrator in 1977. By the 1980s, he had taken it upon himself to develop a line of pants made out of innovative materials, featuring ultra modern cuts and newly interpreted patterns paired with a perfect fit to create a trendy fashion garment. His entrepreneurial spirit created a buzz and the company still enjoys the reputation of being a trouser styling expert and pioneer today. In an era when Italian style was a must, the company began to launch its creations into the market under the ALBERTO brand name. However, the name was also homage to the founder of the enterprise, which is why it became part of the company name in 2003. Georgy Walendy knew from the start that the continuation of the ALBERTO success story hinged on having a highly motivated team of employees behind it. He added two directors to the company’s executive level. Since 2005, the trio at the helm of the enterprise consists of Georg Walendy, Marco Lanowy for Retail, Sales and Marketing as well as Jürgen Schmiedel, who is in charge of Human Resources and Finances. The up and coming generation has since also joined the successful company: Anna Walendy, who came on board in 2008, is now responsible for the new ALBERTO Woman’s Collection while Philipp Walendy assumed the position of ADenim Product Manager in 2009. 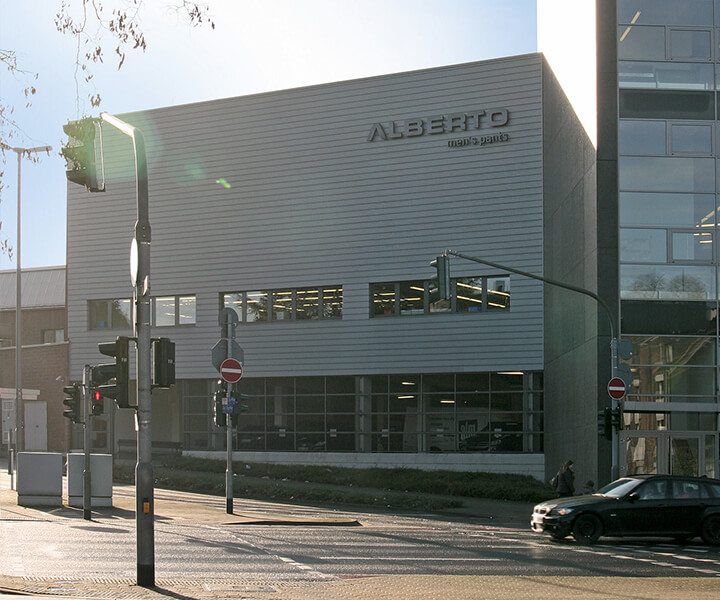 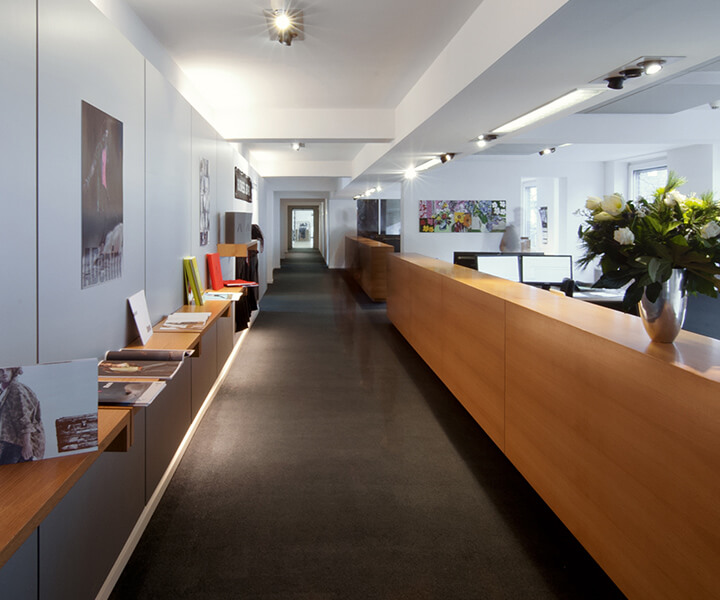 Because they are experts at what they are doing

Anyone who survives in the market for a century has to have some kind of recipe for success. At ALBERTO it is steeped in a wealth of traditions and also very simple: It’s driven by commitment! The commitment to pants, fashion and the customer. Another driving force is the dedication to the now 1,300 employees around the globe that embrace every new season with pure passion. Whether our team members are scouting for trends in all of the world’s prominent metropolises, whether they are spending countless hours working on sketches or choosing fabrics, threads, rivets and buttons, or check the fit on a mannequin or an actual model, whether they are meeting with suppliers or customers around the globe, performing the stringent quality inspections every pair of pants has to pass or are organizing our logistics processes so they run smoothly or making certain that a shipment leaves our warehouse in due time – the processes may be cost intensive, but our dedication pays off. The numbers speak for themselves – or, more specifically, for ALBERTO: the enterprise that emerged 92 years ago as a small tailor’s shop in Mönchengladbach has evolved into a multi-award-winning pants label that does business worldwide. By now, the brand can be found in 2,500 stores in 56 countries. However, the fashion label still has a lot of new expansion potential to tap into in additional countries. Its current export quota is 56% and continues to grow.


ALBERTO’s annual sales have reached a level of EUR 45 million. Although the company manufactures all of its garments in carefully selected high earnings plants chosen by the German headquarters operated by partners in the EU, Romania and Tunisia – all of ALBERTO’s earnings are reinvested into its own business. “To safeguard our competitive edge, we have made investments into technology and innovation from the start,” explains Marco Lanowy. The fact that the enterprise regularly opens additions and newly constructed buildings, some of which are extremely futuristic, corroborates his statement. These structures provide the room and leeway for even greater creativity. ALBERTO primary objective is to combine the new with the company’s artisan heritage. This pioneering view of things is something ALBERTO considers part of its culture; so it is being encouraged and does lead the pants manufacturer down some unconventional paths. The most recent example is the Roof Destroyed Denim, which was allowed to weather for 12 months outdoors – on the roof of ALBERTO’s headquarters so that the enterprise could gain new insights into destroyed effects. “What may sound like craziness to some, to us is nothing more and nothing less than just another example of our passion for pants,” explains Marco Lanowy. It also proof that ALBERTO pants are much more than just authentic. They also are way ahead of their time esthetically and continuously make history as far as innovation is concerned. This is evident in every single pair of pants that leaves the state-of-the-art logistics center, which accommodates 190,000 models. Indeed, the company sells a lot of pants. Even in peak times, 85,000 pairs are available day after day and arrive at retail stores within 24 to 48 hours after an order has been placed. This kind of performance requires short response times and outstanding flexibility.

Hence, it is hardly surprising that the thread ALBERTO consumes year after year to make its products would span the world a total of seven times. This is the equivalent of 280 million meters of yarn. ALBERTO also uses two million meters of fabric, most of it sourced in Italy, plus two and a half million buttons. The numbers prove especially one fact: ALBERTO makes a whole lot of pairs of pants. Each pair boasts perfect craftsmanship. This is, without a doubt, another reason why the label has so many loyal, enthusiastic customers – and not just in Germany. However, ALBERTO does not manufacture mass merchandise. That would be impossible given the exacting quality standards. Instead, the brand’s popularity is driven by its diversity and the fact that the collection can be combined in so many ways.

It is bold. Creative. Or relaxed and sporty. Sometimes formal and elegant. On occasion, the different genres are blended. Countless attributes can be used to describe pants by ALBERTO. After all, over the years many other lines have evolved from the core collection for men, which also was the basis for the creation of the iconic and frequently copied model Ceramica. One of the new innovations was the ALBERTO Golf, which was developed in 2004 after a special request had been received from pro-golfer Alex Cejka and which became the international trademark of style enthusiasts among golf players. The ADenim Jeans Collection, whose unique styles deserve a special declaration of love, was launched in 2009. More recently, these flagships of great taste when it comes to trouser fashion are also conquering the world of women’s fashion. Since 2012, the ladies have had access to their own line of ground breaking pants - ALBERTO Golfwoman. Last, but not least, this year marked the launch of the company from Mönchengladbach’s most recent coup - the ALBERTO Woman Collection. Once the Golfwoman Collection turned out to be such a sensational success, the demand for a women’s line from the creative label just had to be satisfied. 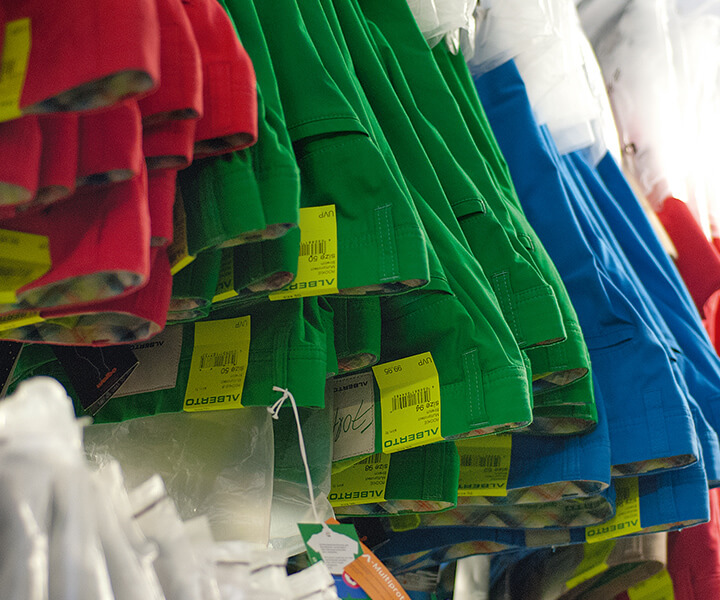 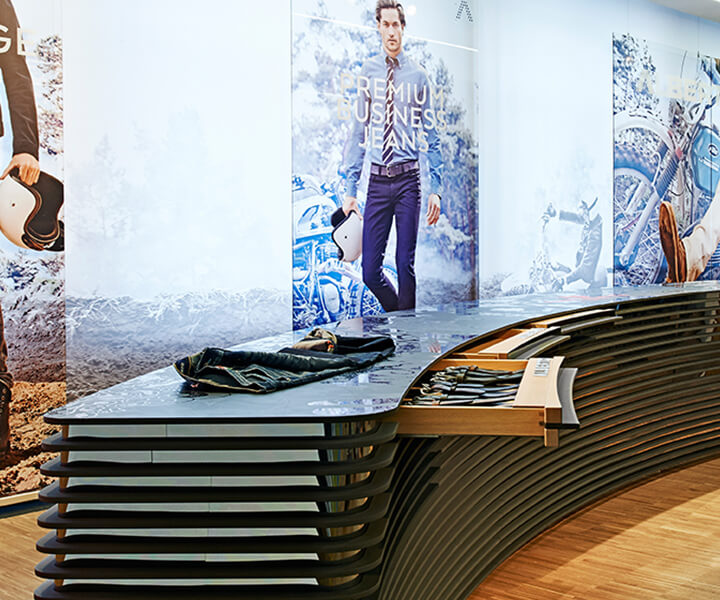 Focus on the important

“We are of course a passionate, virtually style and detail obsessed team. But we’re also business administrators who think in economic, well organized structures,” Marco Lanowy sums up his vision. At ALBERTO this means that while the company is constantly reinventing itself, it always keeps a keen eye on the important. “From our perspective, the focus has to be on the modern pair of pants that most importantly fits perfectly,” observes Marco Lanowy. His statement simultaneously clarifies why he has not given in to the market’s urging to become a universal supplier to date: “In my opinion, for an enterprise that has a basis of so much tradition and decades old artisan skills and knowledge dedicated to the creation of the perfect pair of favourite pants, it would be fatalistic to get scatter-brained and be in all of these other segments while moving away from our core competences.” It would be the kind of mistakes that has brought so many other companies to the brink of disaster.
Hence, the motto remains to have confidence in one’s own strengths, even if it takes persistence now and then. The fact that the brand grew organically, i.e. step by step and has never been bent out of shape is likely another ingredient in the company’s recipe for success. “Of course this is possible only because we are a highly democratic family operated enterprise in which the blatant profit interests of the shareholders were never our first priority.” Instead, everyone at ALBERTO has the opportunity to focus all of their attention, passion and energy on the product. This, in turn, hinges on remaining autonomous. It takes a strong, assertive – and yes, sometimes eccentric – entrepreneur, who follows his own calling and is intent on moving this forward. It takes the kind of steadfast will, which has been present at ALBERTO from the beginning and has never been broken. There are, after all, always plenty of challenges. The current one is the mobile shopping boom and the required response to changing consumer patterns. There is also the question of what drives the purchasing decisions for pants. “We still have a lot of work to do,” says Marco Lanowy. “As we go through all of that I am determined to keep alive the spirit that enables us to make what the name ALBERTO stands for today: Pants We Love.”

Find all ALBERTO dealers in your area with the STOREFINDER!

Come visit us in Mönchengladbach in our ALBERTO CONCEPT STORE.